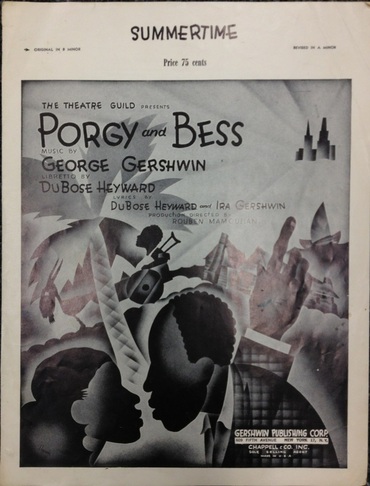 Image of the published music to "Summertime." Date of printing unknown.
Of all of the arias from the opera "Summertime" stands out as one of the most memorable and popular from the entire work. Considered to be one of Gershwin's most successful throughout his career, this particular composition has been performed and recorded across various genres by numerous performers, and is considered by many to be a standard in both the Broadway and jazz repertoires.

Popular and jazz musicians continued to perform and record individual numbers from the opera as well, especially "Summertime," which became Gershwin's best-known song. Will Friedwald attributed its broad appeal to its "multi-facted, poly-generic nature," and indeed, it was performed variously as a lullaby, a blues, a ballad, a comedy song, and so forth; and, moreover, in a wide range of styles, particularly jazz, but also folk, rhythm-and-blues, country, gospel, rock, and world pop...(Pollack, 661).

As artists have performed and recorded "Summertime" over time, many have altered the song from the original published version in various ways:
* A BBC documentary outlining this very evolutionary process aired in 2012. Though unobtainable at the time of this website's publication, the film can be found here.